Katmai Bears 2016, Continued… Into the Drink

The bonus of my deep love for the Katmai brown bears is that I get to watch them at Brooks Camp, one of the most beautiful campgrounds I know. The camp is right on the edge of the lake, which is ringed with snow-capped mountains and clouds that form and dissipate. The lake’s waters change from glacial turquoise to a vivid blue and then to gray and menacing. The view of this pristine lake is never the same twice. 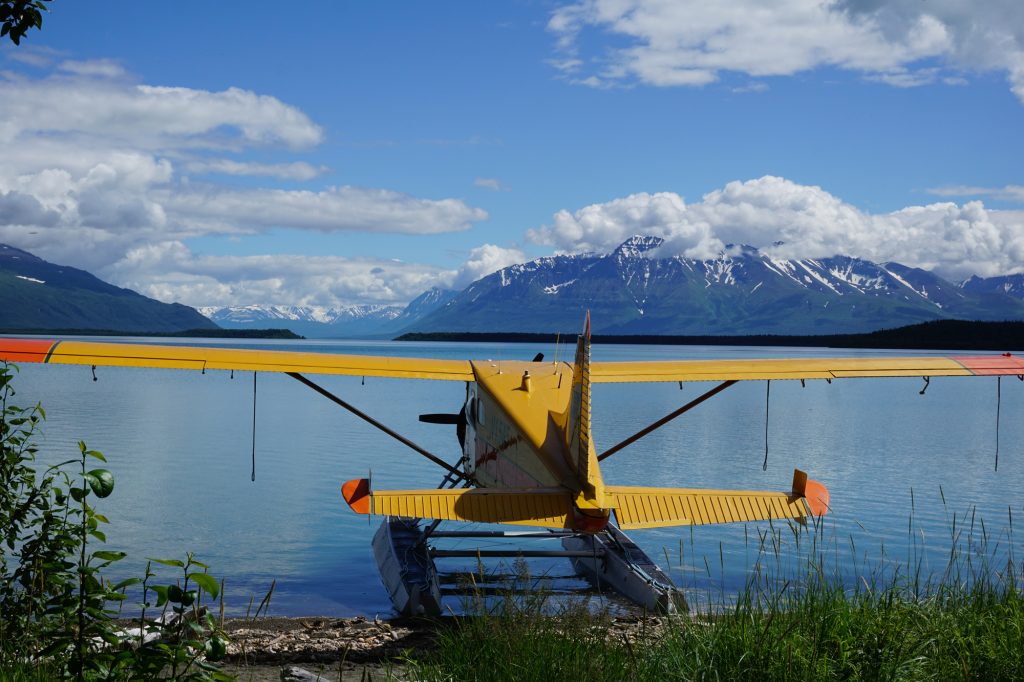 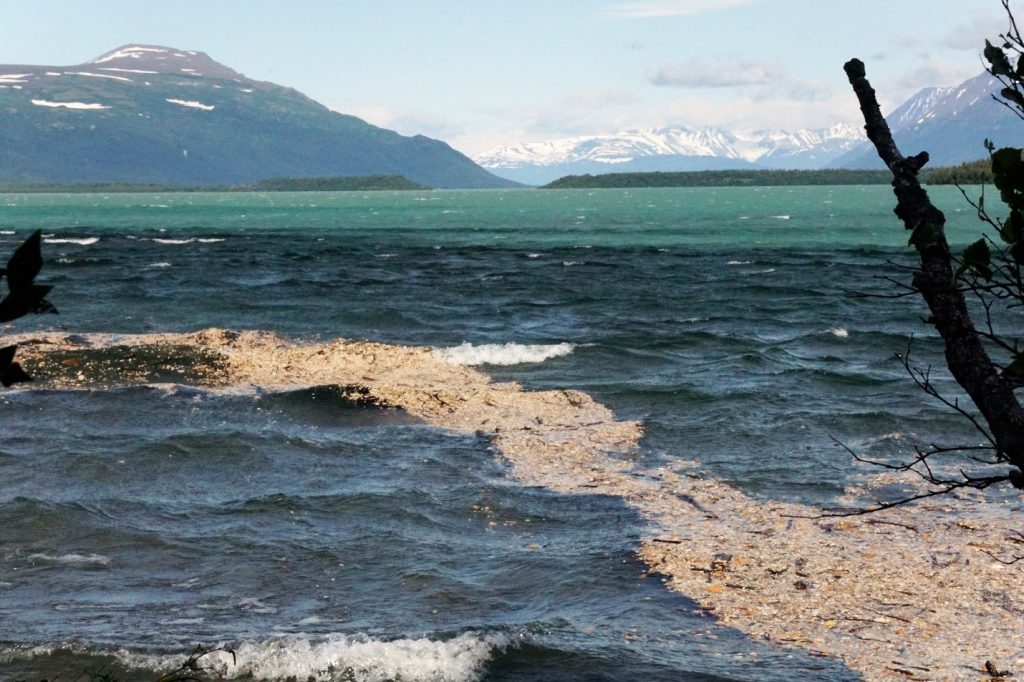 High water floats all the pumice off the beach creating what is known as a “pumice cloud.”

As soon as the salmon began to run there were lots of male bears below Brooks Falls, all grabbing for the leaping fish. But there were no bears to be seen fishing on the lip of the falls – a spot that is traditionally the professional photographers’ favorite shot.

It’s the females that usually take their positions at the top of the falls, but this year the mamas were all wary of the males because of their new cubs. The females kept a wide radius between their families and the males that would happily kill a vulnerable cub to mate with its mother. For a time we saw only the solitary males, and I started to wonder if the sows and cubs would make a showing. 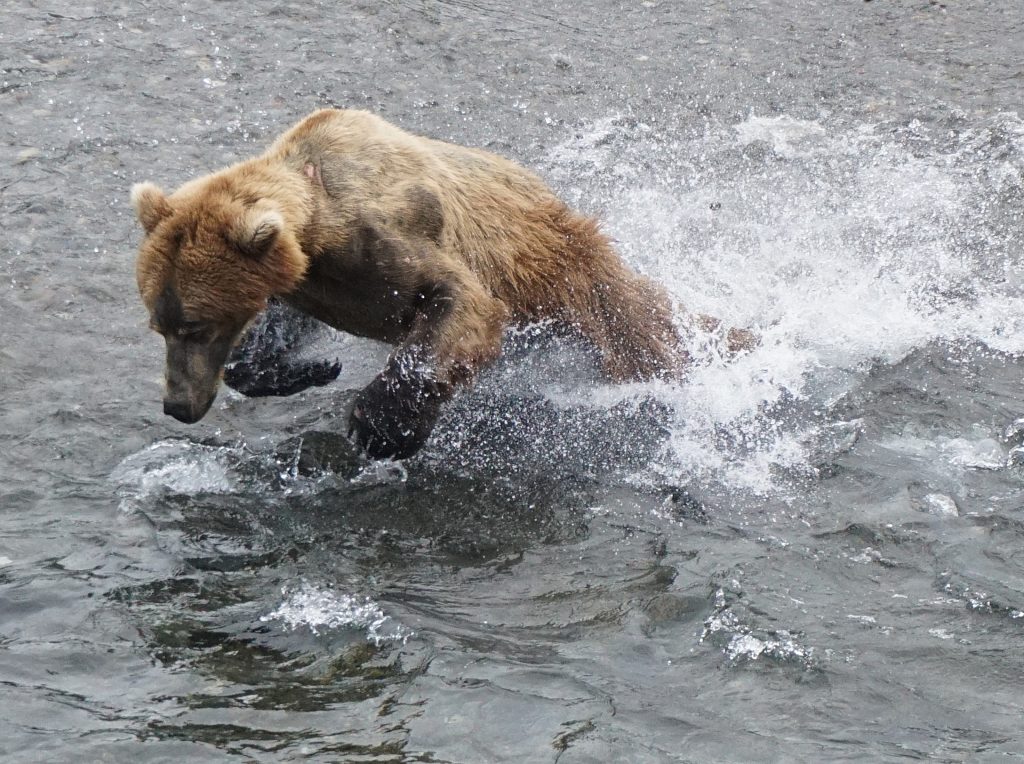 Pouncing for his supper

Finally bear 410 arrived with her 2 yearling cubs. She must have felt the males were adequately preoccupied catching fish below the falls so she parked her cubs on the water’s edge and ventured out onto the lip of the waterfall, directly above the area known as the “Jacuzzi.”

The larger of her cubs watched mom catch and eat a couple of fish. The cub leaned further and further out over the falls in its desire to participate, and when he could stand it no longer waded out to join mom on the lip. We held our breath, expecting the cub to be swept over and into the Jacuzzi, right smack in the middle of the current alpha male’s favored fishing spot. Amazingly, this ballsy little would-be fisherman not only held his ground, he started stealing mom’s fish as she caught them! At last mama lost her patience and turned on him, driving him to stand back and show a little respect. 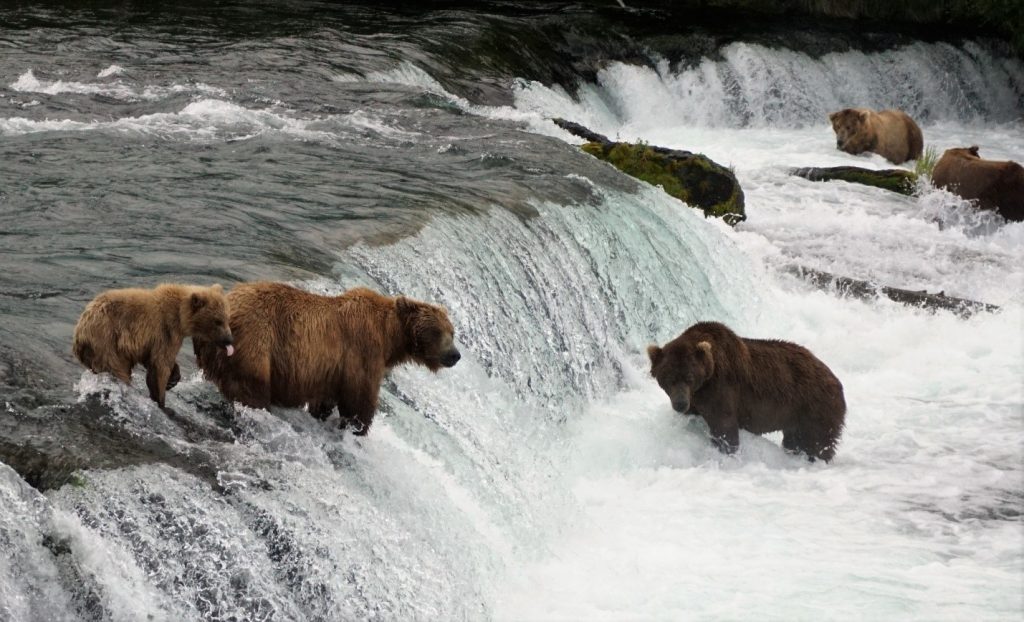 Mama and her cheeky cub perched atop the falls 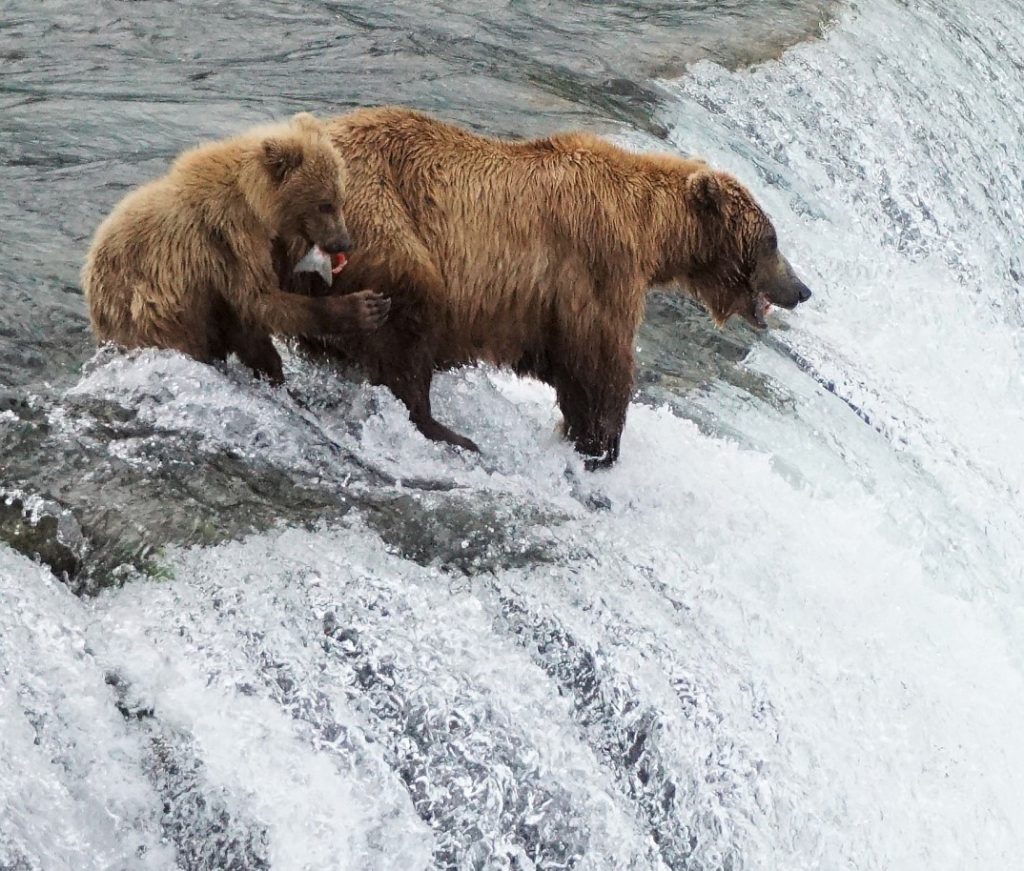 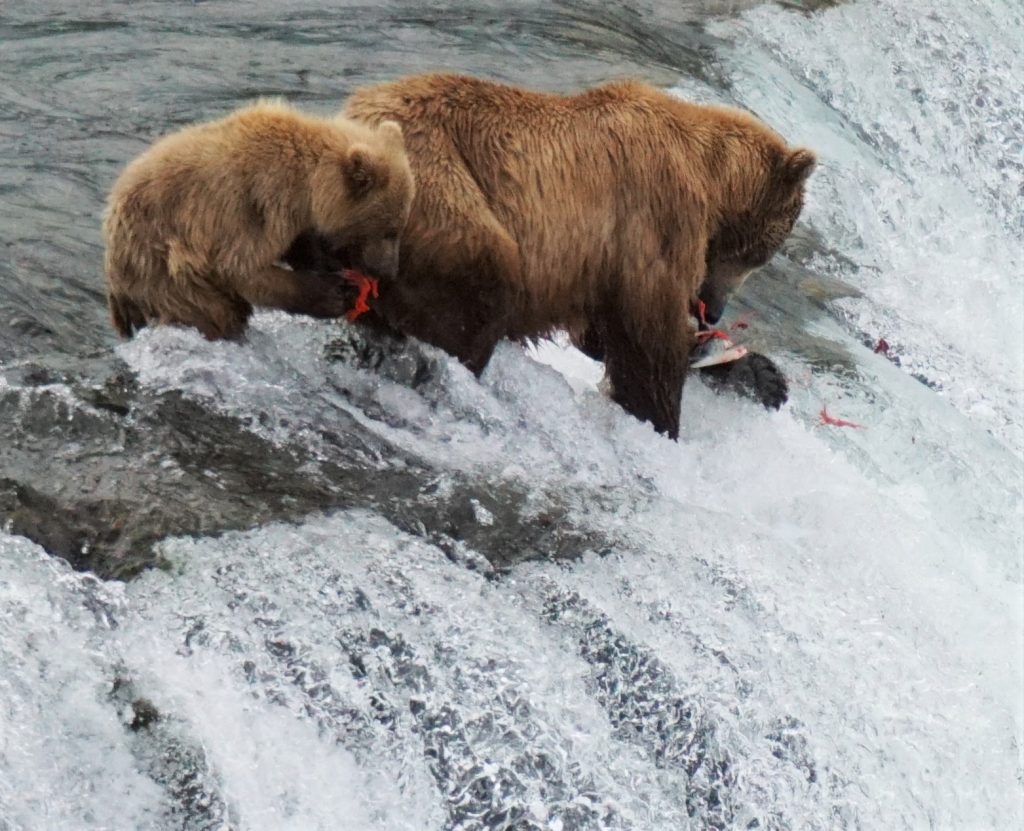 Then something happened that we have never seen before. The distracted mother lost her footing and tumbled over the falls. Some four-hundred pounds of mama bear went splash into the Jacuzzi, missing big, bad male 747 by mere inches. Fortunately for the discombobulated mother, 747 was also startled and she able to exit the Jacuzzi without being attacked. 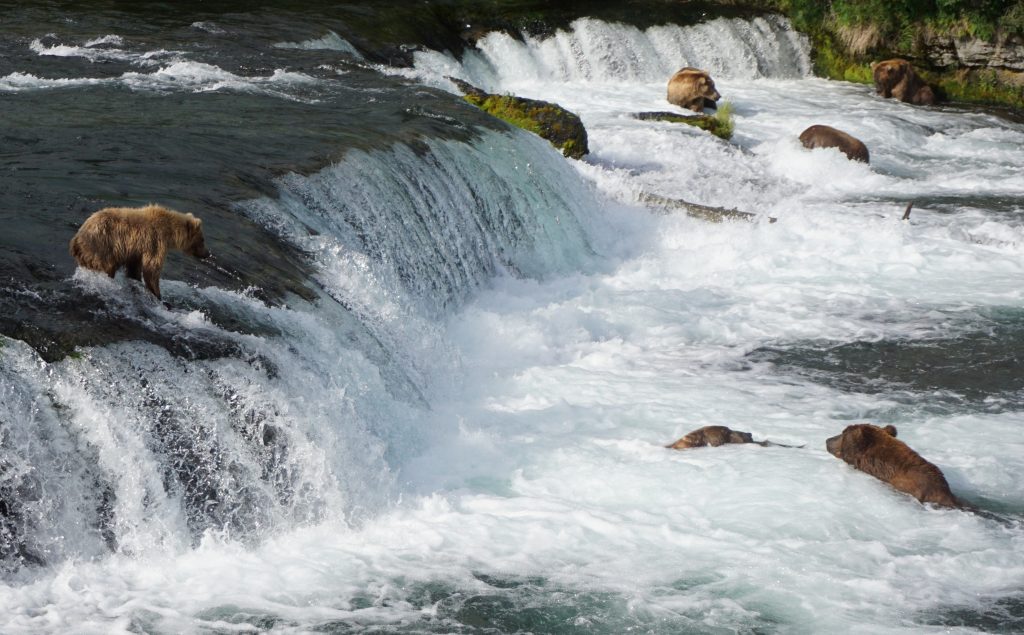 Mama's in the drink!

But there above her stood her cub, all by itself and exposed on the lip of the falls. The recovering male still directly below, and you could almost see the cub’s little wheels turning as he thought, So… am I supposed to jump too? (He didn’t, much to our relief. We were able to breathe again when mother and cub were reunited with no more tumbles into the drink that day.) 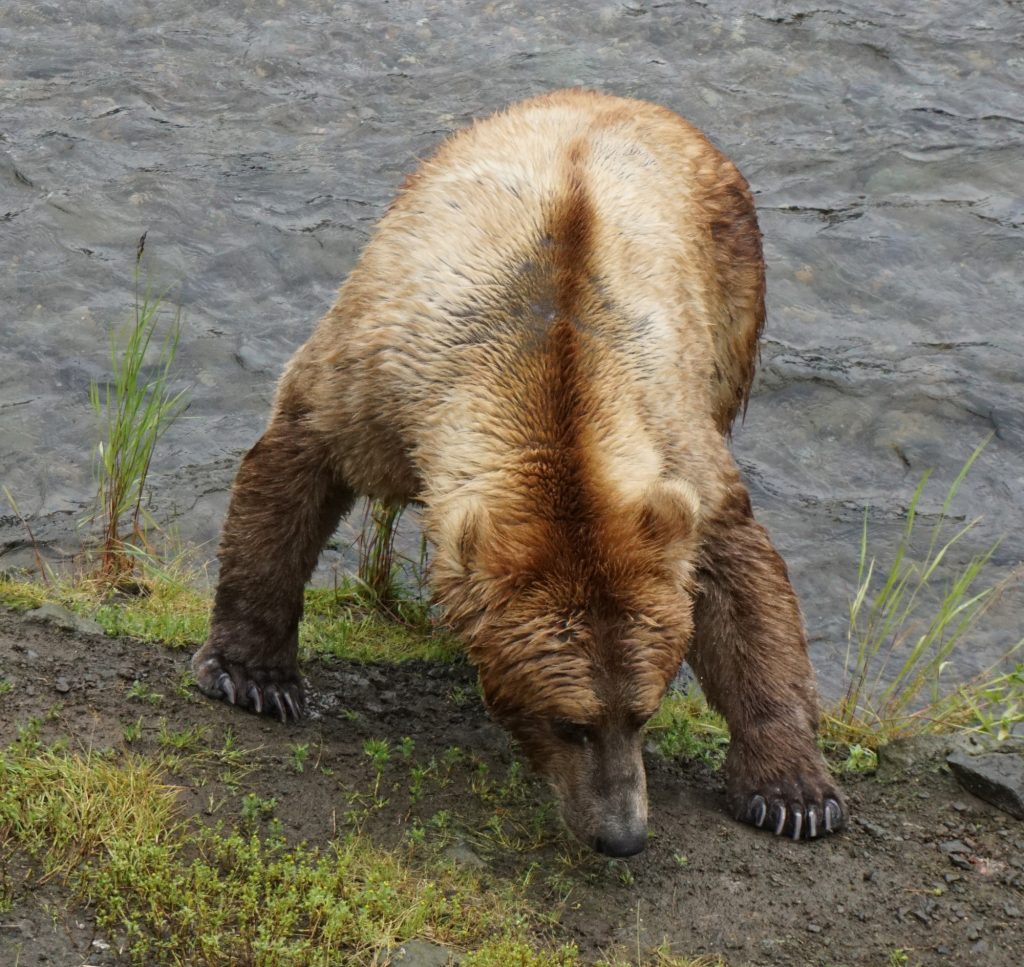 One of the big males showing off his claws 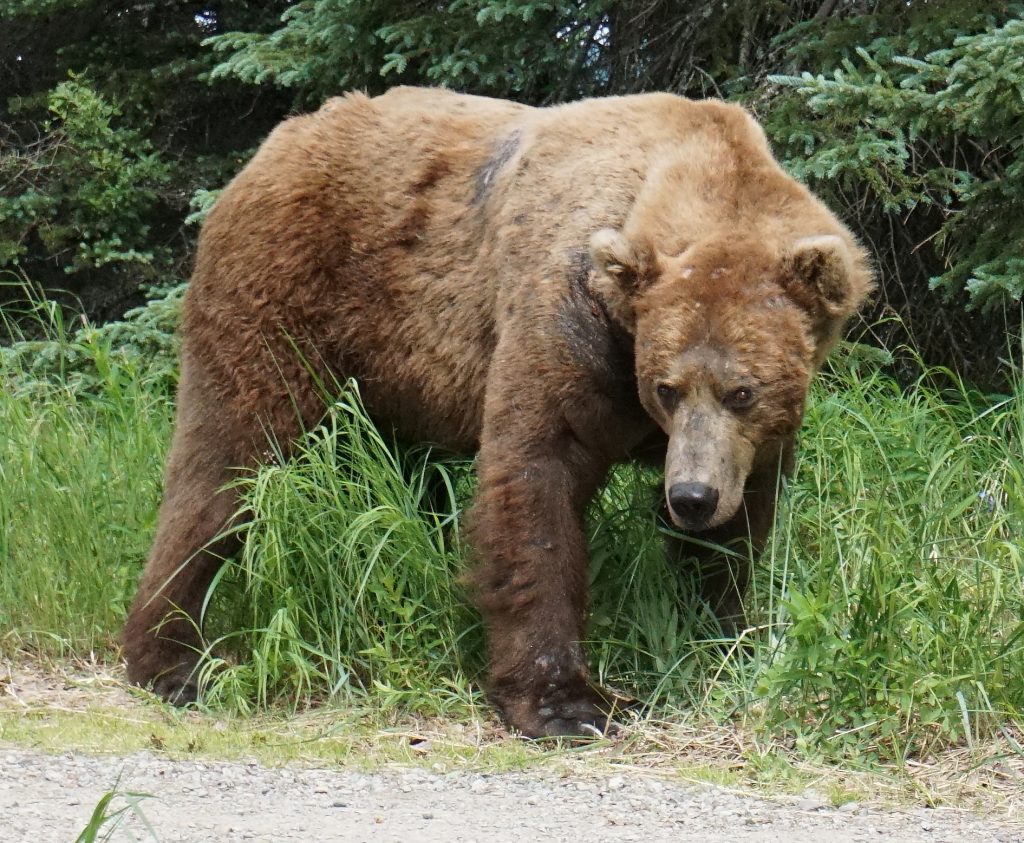 In 2015 we were walking on the trail from the lodge to the bridge when a male came past at a full run. We immediately moved as far back from that side of the trail as we could because you know that when a male comes through at that speed there is an even bigger male right behind him. Instead of continuing the chase, he stopped to make it was clear who was boss. This is the closest I’ve ever been to one of Katmai’s spectacular brown bears; eight feet away, and that is a look I won’t soon forget.

Even though it would rain for 7 of the 10 days we spent this year at Katmai, the beauty of this place, the presence of bears, and the fascinating people we met during this great adventure made it yet another amazing year at our beloved bear camp. You can bet I’ll be back again, soaking up the scenery and spending time with the bears.

Check back soon for links to new bear videos, and here are a couple more favorite pictures of serene Naknek Lake... 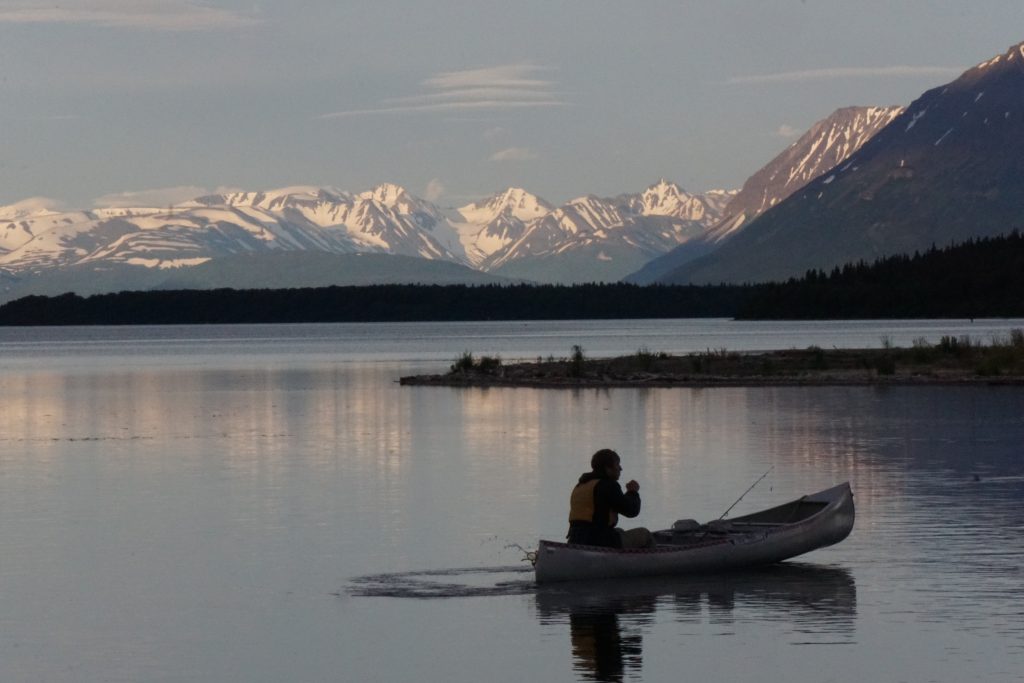 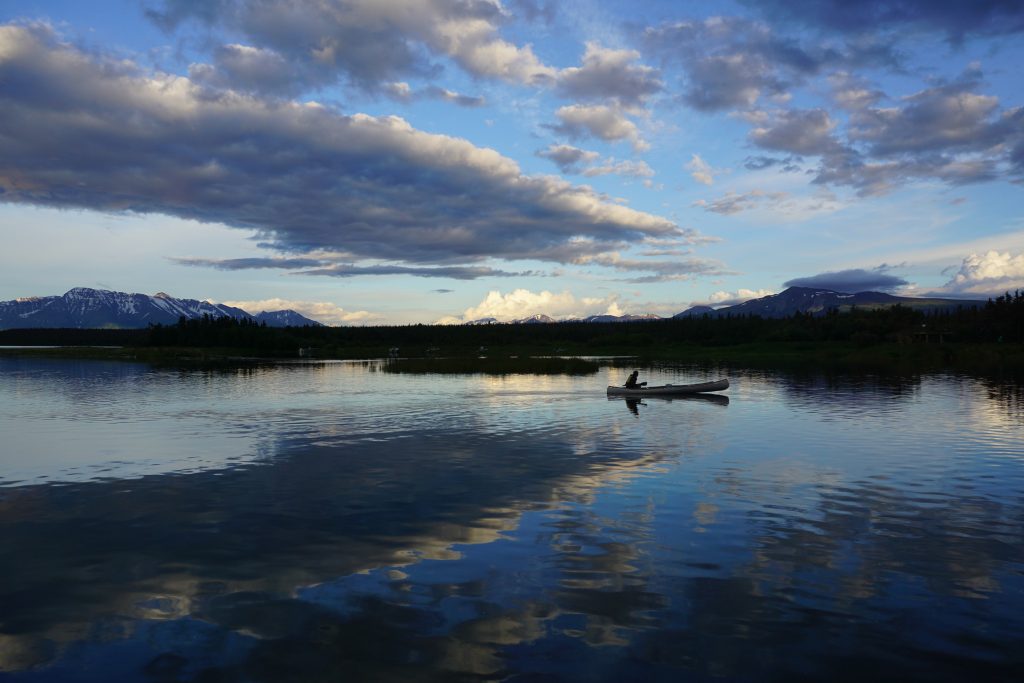