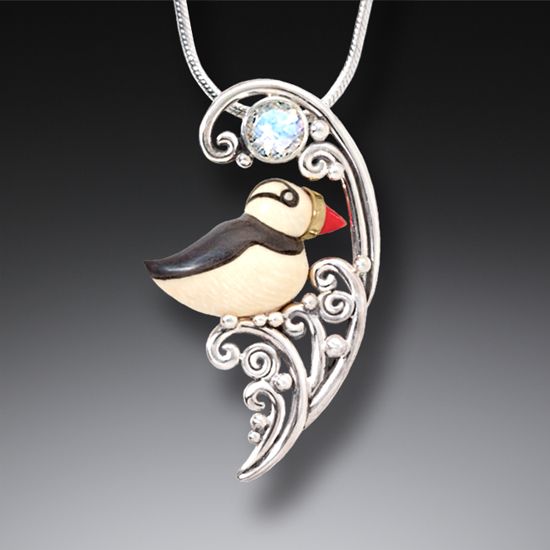 This graceful pendant from our puffin jewelry collection is inspired by rich, natural materials and our signature cresting wave motif that captures the sea's timeless ebb and flow.

The delightful puffin stars in this sea-inspired sterling silver and moonstone carved ivory pendant. These parrots of the sea are instantly recognizable for their vibrant beaks, which are only this large and colorful during the spring mating season. Winter sees a smaller, grey version of their signature feature.

Puffins lay only a single egg annually and typically mate for life. Their cartoon features and propensity for loud chatter when together on land belie the puffin's more profound symbolic representations including creative expression, longevity, faithfulness, and an active spirituality. The Tlingit, indigenous peoples of the Pacific Northwest, have a myth that tells of puffin flock saving a young woman from drowning. The flock favored her, it was said, because she longed to sit among them.

Our puffin necklace is carved from ancient mammoth tusk, which is over 15,000 years old. Mammoth ivory has lain in the earth or permafrost for millennia and is an ideal material for representing the puffin's creamy feathers. Here it is inked in black and orange. Mammoth tusk whispers to us of a time long, long ago when these great animals still roamed the earth.

The puffin wears a 14k gold fill band around his beak as decoration and perches on a gorgeous sterling silver breaking surf motif. A sparkling rainbow moonstone, the stone of spirituality and reflected truth, finishes this mammoth tusk necklace.