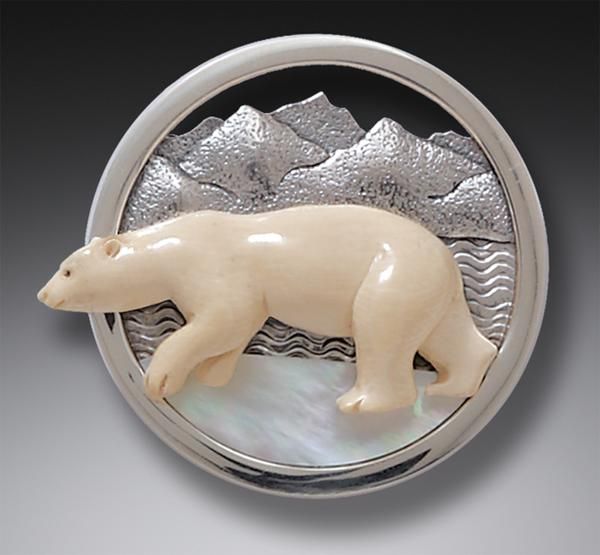 This fossilized ivory polar bear pin/pendant pays tribute to the endangered polar bear with ancient mammoth ivory, a material that reminds us how the earth can lose an entire species forever.

The polar bear featured in this carved ivory pendant/fossilized ivory pin is both profoundly symbolic and representative. Native peoples have long held the polar bear in reverence for his courage, purity of spirit, strength, and wisdom. He is a mythological teaching figure to the Inuit and a beloved symbol worldwide.

Despite the romance surrounding the polar bear's myth, he is a very real creature in very real danger of extinction. The polar bear has been declared an endangered species, and the primary reason for this is that his hunting habitat—the ice cap—is vanishing. Global warming is leading to shorter and shorter ice cap hunting periods for the polar bear, severely reducing his odds for getting enough to eat.

This mammoth ivory necklace highlights the polar bear's natural beauty with a luminous mother of pearl ice cap and icy mountain habitat depicted in sterling silver. The polar bear himself is artisan carved from fossilized mammoth ivory, an ancient material that is uniquely connected to the subject. Much like the polar bear's current plight, the great mammoths were once endangered and are now extinct.

The mammoth ivory featured in this piece is over 15,000 years old. It has lain in permafrost or in the earth for many thousands of years, emerging a pale to rich creamy hue that is ideal for representing the bear's distinctive coat.

This precious polar bear necklace in silver and fossilized ivory also features a pin back, creating two pieces of jewelry in one. Wear it with one of our bear charm bracelets or a pair of polar bear carved ivory earrings for a complete set!