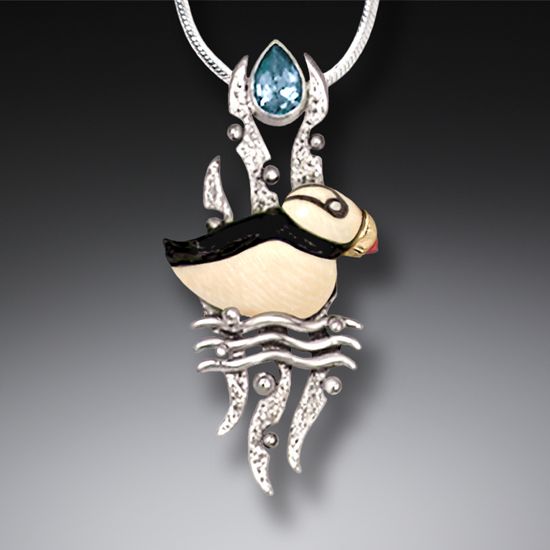 The beguiling puffin makes a delightful subject for this sparkling sterling silver and blue topaz pendant. These parrots of the sea are instantly recognizable for their prominent, vibrant beaks, which are only this large and colorful during the spring mating season. Winter sees a smaller, grey version of their signature feature.

The genus name for the plucky puffin comes from a Latin word meaning 'little brother.' This name was selected for the puffin's black and white feathers, which resembled the humble monk's robes. The Tlingit, indigenous peoples of the Pacific Northwest, tell a legend in which puffins save a young woman from drowning. She was favored, it was said, because she longed to sit among the beautiful birds she so admired.

Our puffin is carved from ancient mammoth tusk, which is over 15,000 years old. Mammoth ivory has lain in the earth or permafrost for millennia and is an ideal material for representing the puffin's creamy feathers. Here it is inked in black and orange. Mammoth tusk whispers to us of a time long, long ago when these great animals still roamed the earth.

The puffin wears a 14kt gold fill band around his beak as decoration and perches on a sea and kelp inspired sterling silver setting, crowned with blue topaz. Blue topaz, the stone of serenity, communication, and creative inspiration, also evokes the sea with its clear aqua tones and faceted sparkle.