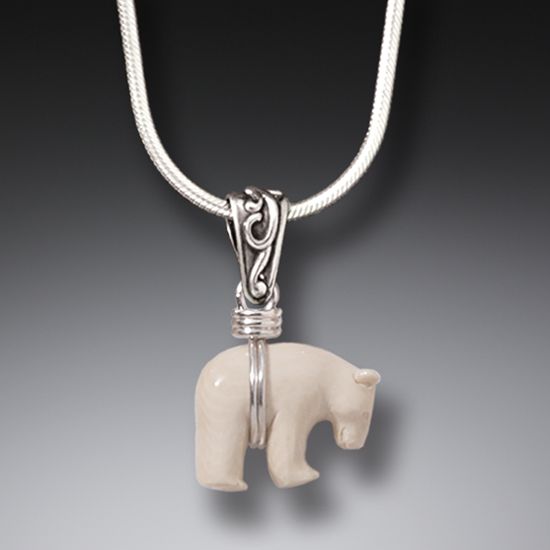 Our Zuni bear pendant marries Native symbolism and tradition from the South and the North. This polar bear carving is inspired by a traditional Zuni bear fetish shape that has long been used in ceremonial activities. The Zuni people live primarily in New Mexico, and like all Native cultures they enjoy a rich and storied mythology populated with animal/nature symbolism.

This carved ivory pendant is made with an ancient material that offers a poignant connection to the polar bear's current plight. The fossilized mammoth ivory used to carve this polar bear is over 15,000 years old. It has lain in the earth for many centuries after the last of the great mammoths became extinct. The polar bear himself is now threatened with extinction due to the vanishing ice caps and habitat depletion we are seeing with the effects of global warming.

Pair this ancient mammoth ivory necklace with a complementary pair of Zuni Bear earrings for a set that is sure to turn heads, and hearts, everywhere you go!