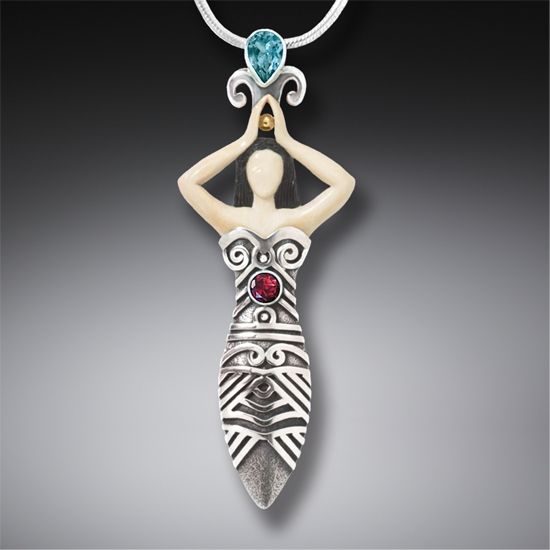 Our jewel and mammoth ivory goddess pendant takes its inspiration from an ancient Cucuteni clay figurine dating back over 5,000 years—a vibrant piece from our silver goddess jewelry collection.

This silver goddess pendant is inspired by an ancient Cucuteni goddess clay figurine found in the area that is now northeast Romania and dating back to between 4300 and 4200 B.C. The Cucuteni culture, considered the birth of European civilization, appears to have revered the mystical feminine/goddess figure. The vast majority of their many ceramic sculptures and figures were created in this feminine silhouette.

We believe that the decorations on the Cucuteni figurine symbolize the process of becoming. This symbolism works beautifully with the emerging goddess pose that defines this carved ivory goddess pendant. She is seen here blossoming into her fullness and holding a golden orb above her crown chakra—an offering to the divine within.

Our designers selected blue topaz, symbolizing calm and peace, and deep red garnet, symbolizing regeneration and vitality, for this pendant. Both stones are faceted to bring out their inherent sparkle, and both add a richly jeweled finish to the goddess.

Her face, hair, and arms are carved from fossilized mammoth ivory, a material that at over 15,000 years old is more ancient than the Cucuteni civilization. Our fossilized ivory has lain in permafrost or in the earth for many millennia, accreting a warm creamy hue. It is hand carved and the hair inked for this piece, lending it an extra touch of ancient eras gone by.