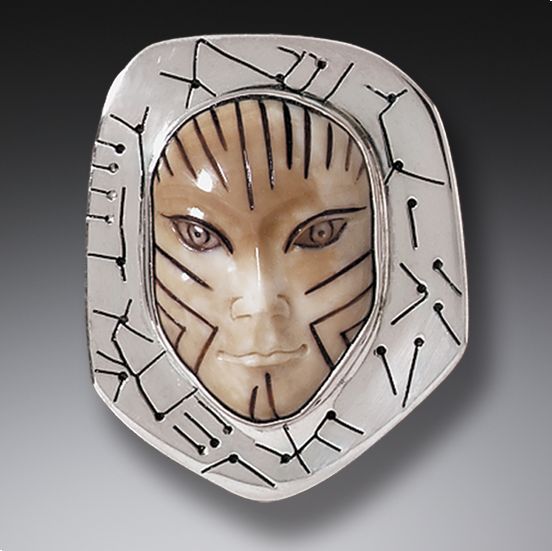 Inspired by European art dating back to between 4200 and 5000 B.C., this Vinca mask pendant and fossilized ivory pin can be worn both ways to bring a touch of ancient cultures to your look.

Our fascinating Vinca mask pendant also doubles as a fossilized ivory pin, creating two dynamic ways you can wear this statement piece. The Vinca mask blends ancient history with modern design, creating jewelry that is contemporary and a real conversation starter. Its neutral tones and classic sterling silver setting make it as wearable as it is captivating.

Vinca Culture, which flourished between approximately 4200 and 5000 B.C., is so named for its discovery near the village of Vinca in what is now modern day Serbia. Theirs were some of the most extensive settlements in prehistoric Europe, though we are still uncovering details into the people, their rituals, and beliefs.

The inscriptions on this mask pendant's border is adapted from a spindle whorl uncovered in Southern Yugoslavia. The meaning of the inscriptions is unknown, although the markings appear on religious items, indicating they were intended as a form of sacred hieroglyph.

The hand carved fossilized walrus ivory face is inspired by a sculpture discovered in Greece. Fossilized walrus ivory spends centuries in the earth where minerals stain it a range of soft caramel to rich cocoa shades. It is a prized cultural and economic resource for the Native Alaskans who gather it for carving, sale, and trade. Its relative scarcity and high quality make it a prized fossilized ivory, ideal for fine jewelry and artisan crafts.

Pair this carved ivory pendant/pin with a pair of carved ivory earrings also inspired by ancient cultures to complete your set!