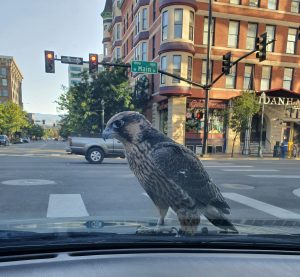 I had an amazing downtown Boise experience. I stopped at the light and saw a peregrine falcon on a fire hydrant. It made very intense eye contact with me and then launched itself to the hood of my car. To my absolute amazement it decided it needed a better look so flew and walked directly in front of me and bought its head up to the glass. To be held so intently in its awareness was awe inspiring.

I sat through a green light as we checked each other out. Luckily the person behind me must have seen it fly over as they waited patiently 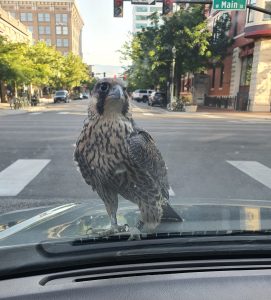 On the next green it jumped to the roof of my car, so I drove through the intersection and pulled over. 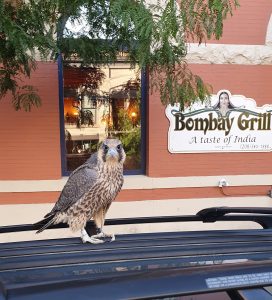 To my amazement it was still there, on the passenger side, but when I got out it hoped over to my side and we examined each other again. 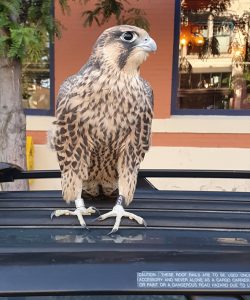 It was as if we were in our own private bubble as cars drove past and there was even a guy on a bench 12 feet away who never looked up from his phone.

My research since this happened has the majority opinion being it is a female fledgling out on her first attempt at flight. Born and living free from a nest on the top of the CenturyLink building at the corner of 10th and Main in Boise. Two males had already left the nest. Evidently the male fledglings are lighter so they don’t have too much trouble obtaining lift as they strike out on their own. The one I met was the female and heavier than the males so she did not have such a successful first flight.

Luckily it seems the force was with her for her second attempt. When she made her decision to try again she left my car and dropped close to the ground, passing back through the intersection with barely any height. Fortunately her timing was perfect and the lights had just changed as she passed through – meaning no cars. I watched as she achieved lift on the other side and she was still gaining height when I lost sight of her.  You can view her 2nd flight on the Zealandia Designs Facebook Page.

My Facebook photos went viral and reading everyone’s comments reaffirmed how people are inspired and uplifted by many different creatures, how they relate to them in a deep and spiritual way. I was asked how I interpreted the encounter, what meaning I took from it. Like many small business owners right now, the question on my mind at the time was “what can I do to help Zealandia survive the pandemic?” And the answer came!

My designs are inspired by the natural world then carved and sculpted to represent polar bears, bees, turtles, hummingbirds, octopuses, whales, eagles and other threatened or endangered creatures. Working with ancient fossilized ivory like that of the mammoth, extinct for over 10,000 years, I am constantly reminded how easily such a magnificent creature can go extinct.

Climate change and the conservation roll backs initiated by the current administration are having a disastrous effect on all the amazing creatures we share this glorious planet with. It is my hope that when people wear one of my polar bears, or some of my bees, it will spark a conversation on what can be done to clean up our act.  One of my realizations from my wonderful Peregrine encounter is to try to do more to inspire those conversations.

We see so many magnificent birds of prey in the Boise area due to the outstanding work done by The World Center for Birds of Prey. They helped bring the Peregrine back from the brink of extinction and their breeding and release of the Giant Condor is an inspiring success story.  www.peregrinefund.org